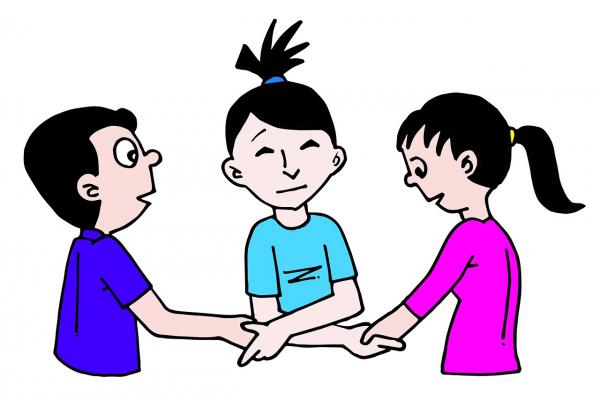 Pablo and Ahmed are two students of a basic vocational training course at a school in Madrid. They live in different neighborhoods, they do not have groups of friends in common other than their schoolmates. They go to the same class, but their relationship is not limited to meeting only on school premises, on a few occassions they have worked together.

They never had any particular problems, until one day when they had a conflict situation also involving other students from the school. Pablo heard the (unfounded) rumor that Ahmed had kissed his girlfriend. After school, Pablo went to look for Ahmed, confronting him very aggressively, asking for explanations. Ahmed, intimidated and not fully grasping what was happening, reacted violently by hitting and throwing Pablo to the ground. Fortunately, at that moment a group of teachers passed and stopped the fight.

In order to resolve the conflict between the students, the tutor is responsible for choosing a third student to act as mediator (they may be students of the same class or another). Students that have been selected to act as mediators must meet a number of requirements (see "Remarks").

This step empowers other students (who must be carefully chosen) and provides a way for the teachr to promote searching for solutions. Students are aware that the solution is in their hands.

The tutor explains very clearly the requirements that the mediator must meet and what the next steps will be (see "Remarks"). In addition, the educator tells the two parties involved about the mediation process in which they are about to be involved.

Both the mediator and the students involved in the conflict are prepared to take part in the process, accepting the commitment. The fact that it is another student who will mediate the resolution process, makes the parties involved have an initial predisposition much more open to listening and a greater motivation to solve the problem.

If there was an adult (teacher or educator) leading the mediation process, that person would be placed in a position of superiority with respect to the students involved in the conflict.

The initial predisposition and willingness to find solutions to the conflict could be very different on the students' part if they felt they were being judged by their teacher.

The process of mediation begins, bringing together the two parties involved in the conflict and the mediator.

During the mediation session (there may be one or more), the mediators guide the students, following the steps specified in the "Remarks" section. When the session concludes, a win-win situation is arrived at.

The teacher provides some directions to a third student, who is going to act as the mediator. The problem is to be solved with the help of this mediator, a neutral student carefully chosen by the educator, who will intervene so that a dialogue is established between the two students involved in the fight. The educator explains to the mediator the different steps or actions to be taken. The educator will not intervene in the process.

The requirements that mediators must meet are the following:

The mediator or mediators must know very well the steps to be followed in the process and the rules to be followed by the parties involved in the conflict (which must be clearly communicated at the beginning of the mediation process to both parties).

The steps to be followed in the process of mediation are the following:

STEP 1. Presentation, rules of the game and acceptance of the mediation process: the mediator presents the process, comments on the rules that the parties involved must agree on, and asks if they are willing to get involved in the mediation process in order to resolve the conflict they are in.
STEP 2. Presentation of testimonies by both parties: the parties involved, one by one, present their version of the facts. The mediator, after each part has exposed their testimony, asks: "How did you feel?", and at the end "Would you like to add anything else?"
STEP 3. Clarification of the conflict: special emphasis is to be placed on the interests of the parties involved. The mediators summarize the above to verify that everything has been clear and those involved include clarifications if any. The mediators will try to get each of the parties involved to put themselves in place of the other by introducing questions like "How do you think you would feel?".
STEP 4. Proposed solutions to the conflict: assuming that both parties wish to resolve the conflict, the mediator asks "How do you think we can resolve the conflict?"
STEP 5. Design an agreement according to which both parties win: each party explains what they are willing to commit to in order to resolve the problem. The options are evaluated and the commitments are decided. The mediator takes note and writes down the agreement, specifying: "Do you commit to ...?". The mediator may at last pose a final question: "If from now on any problem arises, would you be willing to settle it among yourselves?" The team can meet after a month to assess how everything goes.

The rules that the two parties to the conflict must be willing to accept are the following: