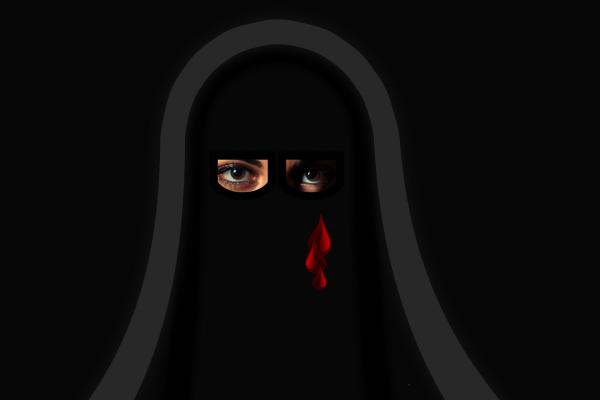 Young girl aged 19, a Portuguese immigrant in the Netherlands.

Ângela, 19, is a Portuguese descending from a family of non-practising catholics, living in the Netherlands. She was the type of girl who used to smoke, enjoyed having fun, occasionally drank… in a general way, she was a very sociable girl.

In a short time, she began adopting a different behaviour: she did not want to study or work anymore, and spent most of the time on her computer. At some point, she converted to Islam, and soon afterwards started to express radical ideas about the society. She began attending several radical Islamic groups in the UK and the Netherlands. She became the online administrator of a group called "Islam in the heart" (written in Portuguese), which, by now, has been deactivated.

Ângela used to say to her mother – with whom she and her sister were living – that her jihad was fought on the internet only and that she would never abandon her family.

However, about a year later, Ângela travelled to Syria to become married to an "Islamic state fighter", who was originally from Sintra, Portugal. They met through Facebook.

Umm has to be allowed by her husband to leave the home because he knows when it is safe to go out. Whenever Umm leaves, she always carries a weapon. She goes with the other “sisters” to the market, to buy, as she used to refer to them, “tasty things”, such as french fries, Pepsi, Nutella, chicken, or rice.

Currently, Umm is considered an extremist and an advocator of the Islamic Caliphate, an enemy of the West and the "infidel countries". She continues to use Facebook to post messages defending the violent positions of the self-proclaimed Islamic State.

Constitution of a team of teachers and other school staff, that will be responsible for the organisation of prevention actions against youth radicalisation.

Involvement of the entireschool community in the discussion and reflection about the radicalisation issue.

Debates with students about radicalisation and related themes, with respect to curriculum contents.

Improve critical thinking and awareness about radicalisation, through real-life situations.

Increase literacy to raise awareness about situations of radicalisation.

This case can be used as the basis for a brainstorming activity, which could be called "What do we think radicalisation is?" After a presentation of the case study, participants are asked to reflect on the following statements by Umm (Ângela). Participants should be encouraged to comment and reflect, so that they can learn more about radicalisation indicators.

[1] "To those who say that he was an allegedly harmless journalist: he was no more than an American soldier killing our people. How many people were killed by such words? Are their deaths useless? One dead American  is nothing compared to the thousands of us they have killed."

[2] "Who will win? Our outdoors, or those half-naked women selling deodorants?"

[3] "When we look into the barrel of a gun, we see paradise; when an aeroplane flies over our homes, we are ready to be hity by a bomb; when a father falls as a martyr, the son is ready to replace him. We will do everything to maintain and expand our Islamic state. How can you defeat a people who do not fear death?"

This case was adopted from an article in the Portuguese newspaper Expresso.