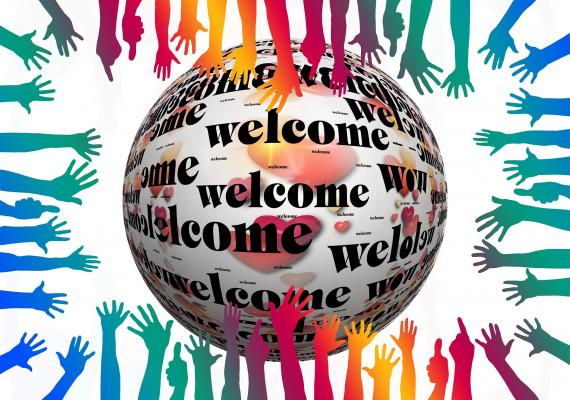 Regular class group: 15-20 people. Technical school students (girls and boys aged 15-16), most of them are of the 'majority' ethnic group.

Adnan and Sayid are two young Syrian refugee students. They came to Cyprus with their families and started attending a public school, with predominantly Greek Cypriot students.

The two boys can't speak the language very well and the other students do not talk with them. In the class they leave them out of activities and on free time the other children often make fun of them for not speaking the language and tease them about the way they dress on account of them being refugees from another country. As well as being segregated by other students, the boys are habitually blamed for any problem faced by the class. On three occasions they were physically attacked by a group of other students shouting slogans such as 'Muslim go home', 'You don't belong here' and 'A good Muslim is a dead Muslim'. As time goes by, the boys start feeling more and more isolated from the group and face problems such as anxiety and sadness which impacts not only their psychological state but also their school performance. The situation has become so difficult for them that they want to leave school all together.

Day time school for mainstream or technical education. There are a variety of lessons during the day (mainstream includes subjects such as languages, sciences and humanities and technical includes lesson related to the direction chosen (e.g cookery, electricians and plumbers) .

The school counsellor, psychologists, social workers, as well as the school administration staff in general, will also be involved in some of the proposed activities.

Establishment of an interdisciplinary team within the school made up of teachers, school counsellors, psychologists and social workers as well as representatives of the school administration for purposes of designing and implementing systematic prevention and counter actions. The team will consider mechanisms and measures that can be implemented on individual, class and school levels.

Incidences will be dealt with in a systematic and holistic way thereby facilitating sustainable solutions in relation to the prevention of such behaviour, but also, providing advice on handling such situations should they arise.

The organisation of a refugee week on the school premises with a variety of cultural and educational activities such as video screenings, photo exhibitions to raise awareness on the countries where the refugees come from, what it means to be a refugee, how significant the host country is to the life, safety and dignity of a refugee and the positive contributions which refugees bring to a host country. A key element is that the activities will be led and coordinated by the students themselves, with the support of teachers.

By placing students at the epicentre of this activity, a learning-by-doing approach is adopted, which facilitates learning outcomes, i.e. knowledge about who is a refugee and the positive role of refugees in societies (reversal of narrative), communication skills, and attitudes such as that of solidarity. Raise awareness on refugees and their countries of origin and cultures. This contributes to altering the negative narratives towards refugees and humanising them. This is a centrifugal part of tackling hateful behaviour towards refugee students.

Classroom discussion on topics such as: refugees, migrants, intercultural societies, solidarity and cooperation. The discussions are coordinated by the teacher who introduces the chosen topics when these are relevant to a particular subject (literature, languages, or humanities), or when a conflict situation is heightening. The discussion starts with the establishment of small buzz groups up to 3 people (intense discussion group that responds to a specific question). Questions include: what is the role of refugees in our society? What are their rights and duites? What is racism and the problem of racism? What is hate speech and who are its victims? Why does bullying occur in the classroom? Who are habitual targets? After 15 minutes of group work, students have an open discussion followed by feedback and input form the teacher about the main points and key learning outcomes.

Students are provided with a safe environment to discuss issues that may be troubling them, issues that are ususally not discussed openly. This is a good opportunity to overcome obstacles and barriers that result form faulty perceptions and intolerant attitudes. It also gives voice to the bystanders and victims, and is a moment of realisation for the perpetrators. Moreover, it facilitates critical thinking on themes which may underlie the negative behaviour directed towards peers (by analysis phenomena such as racism and hate speech), thereby promoting positive attitudes and skills in a sustainable manner.

It is imperative that a learner-centred approach is adopted in the discussion and that a refugee week be organised, as this facilitates the development of necessary skills, knowledge and attitudes.

Some students (especially perpetrators and victims) may be wary of getting involved in such activities initially. However, with positive prompting and support on behalf their teachers, these obstacles may be overcome.